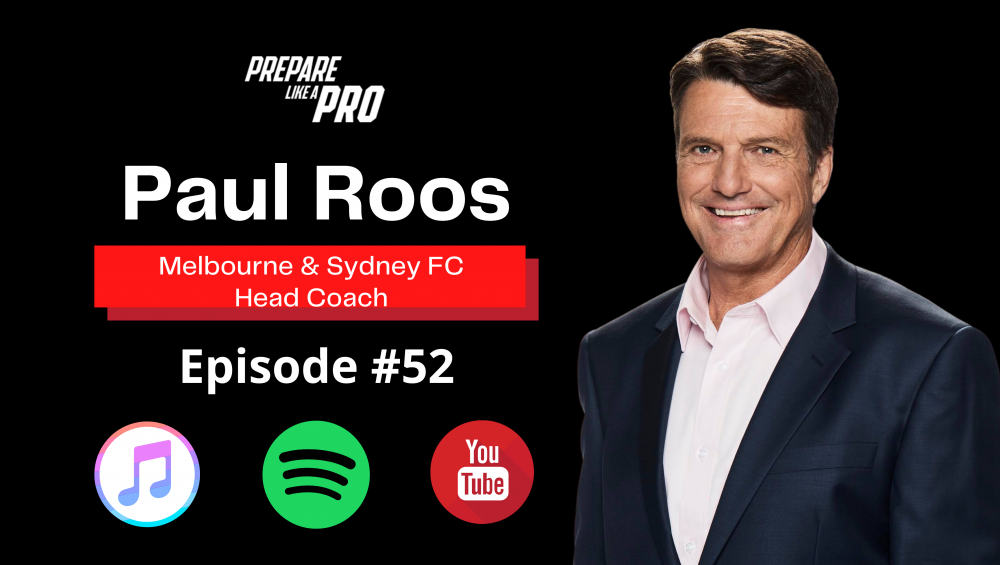 #PrepareLikeAPro features the legendary Paul Roos in Episode 52 Podcast. In this blog post, we will learn more about this amazing person who was inducted into the AFL Hall Of Fame in 2005!

Paul Roos is a household name for the millions of Australians who follow the AFL; he had a storied career as a player and coach. Paul began his playing career at Fitzroy F.C. He finished it at Sydney Swans with 356 senior games, 5 Best and Fairest awards, 7 All Australian selections, and the 1986 Leigh Matthews Medal.

Roos was a dynamic key position player who was a strong mark and outstanding at ground level and was voted the best footballer in Australia during his heyday. In the latter years of the Fitzroy Lions’ existence, he was one of the team’s best players. He was chosen to Fitzroy’s Team of the Century at center halfback.

Aside from earning a well-deserved reputation as an AFL legend, senior coach, and AFL strength and conditioning coach, Roos has also made his mark as a well-respected corporate speaker, television personality, columnist, and author.

Roos grew up in the Melbourne suburb of Donvale, where he played junior football for Doncaster East’s Beverley Hills Football Club. From 1975 through 1981, he studied at Donvale High School. Roos was chosen to play for the Fitzroy Lions’ Under 19’s team since Beverley Hills was in Fitzroy’s recruitment zone.

In 2013, Roos was named head coach of the Melbourne Football Club. His performance model helped Melbourne transform from a struggling squad into a contender for the finals.

Roos’ passion for being a strength and conditioning coach helped him succeed with the Sydney Swans. His groundbreaking methodology to player feedback and appreciation was instrumental in establishing the fabled “Bloods Culture.” Roos led the Swans to their first championship in 72 years in 2005, marking the end of a 72-year title drought for the Sydney squad.

This was Roos’ moment of glory, with over 92,000 spectators at the Melbourne Cricket Ground (MCG) and hundreds of millions more following on television screens worldwide. The 2005 Australian Sports Coach of the Year, former 356-match AFL great, and Australian Hall of Fame figure had just watched the Swans rally to clinch the grand final with a nail-biting 58-54 victory over the West Coast Eagles.

Roos’ contributions to the Swans’ monumental victory could not be denied and was given its due during the post-match celebrations with former triple Hawthorn premiership player Peter Schwab saying, “The greatest strength in Roos’ coaching appears to be his ability to make a group of players believe that everything is about and for the team.”

The Roos’ Swans returned to the MCG on Grand Final Day in 2006 but were defeated by West Coast by a single point. That day, Roos’ genuine spirit was displayed when he accepted the loss in much the same way he had embraced triumph the year before—a sign of a true sportsman.

Roos accepted a summons halfway through the 2002 season to fill a vacancy for the senior head coaching position at the Swans, following an exceptional career as a player. After serving as a full-time assistant coach since 2001, he was promoted to the club’s senior coaching role for a three-year contract beginning in season 2003. He led the Swans to the playoffs in 2003, and his abilities were recognized when he was named AFL Coach of the Year.

After a legendary career with the old Fitzroy club—now called the Brisbane Lions—which included six seasons as captain, Roos joined the Sydney Cricket Ground-based Swans in 1995 and played 87 games for the club. He was a part of the Victorian representative team for ten years, two of them as captain, during his Fitzroy career. He was also named to the All-Australian squad seven times, including twice as captain.

Roos was runner-up in the Brownlow Medal—the AFL’s highest distinction for individual players—in 1986 after being third the year before. He was a very dynamic player with vast marking and kicking skills. In 1985 and 1988, he was also presented with the E J Whitten Medal, which is given to the best Victorian player in State of Origin football.

Roos took over as coach of the Swans Academy after stepping down as Swans mentor. He is the academy’s prominent voice and leader, tasked with guiding approximately 300 players. He also worked in the media, writing for the Herald Sun and doing match day analysis for Fox Footy, among other things. Between 2011 and 2013, he co-hosted On the Couch on Fox Footy with Gerard Healy and Mike Sheahan.

Following his time as Melbourne coach, Roos joined Triple M as a special commentator in November 2016 before returning to Fox Footy as an expert commentator, both of which he still holds.

In late 2013, he signed a three-year deal with the Melbourne Demons after receiving repeated inquiries from the team. He was successful in changing the fortunes of the struggling football club. He was credited for improving the Demons’ on-field fortunes; the team won four games in his first season, more than doubling their total from the previous season, and their percentage rose from 54.07 percent in 2013 to 68.04 percent in 2014. He also made good on his pledge that the club would be “the most difficult to play against.”

Roos retired from the Melbourne Demons at the conclusion of 2016, announcing his comeback to his media duties and resuming his extensive corporate speaking commitments.

When Roos retired from football after 16 years and 356 games (only 12 individuals had played more), he wrote a list of 25 things he wanted to do. “Coaching and playing had both positive and negative aspects for me. I wanted to remember what it felt like to be a player.” The list eventually became the foundation for his coaching style at both his stops in Sydney and Melbourne.

In interviewing Roosy on the Prepare Like A Pro podcast, what sticks out is how he displays and illustrates each of the ideas, as well as how he applied them over his decorated coaching career. The most intriguing aspect is the realization that in order to be a successful coach, Paul has had to recall what it was like to be a player.