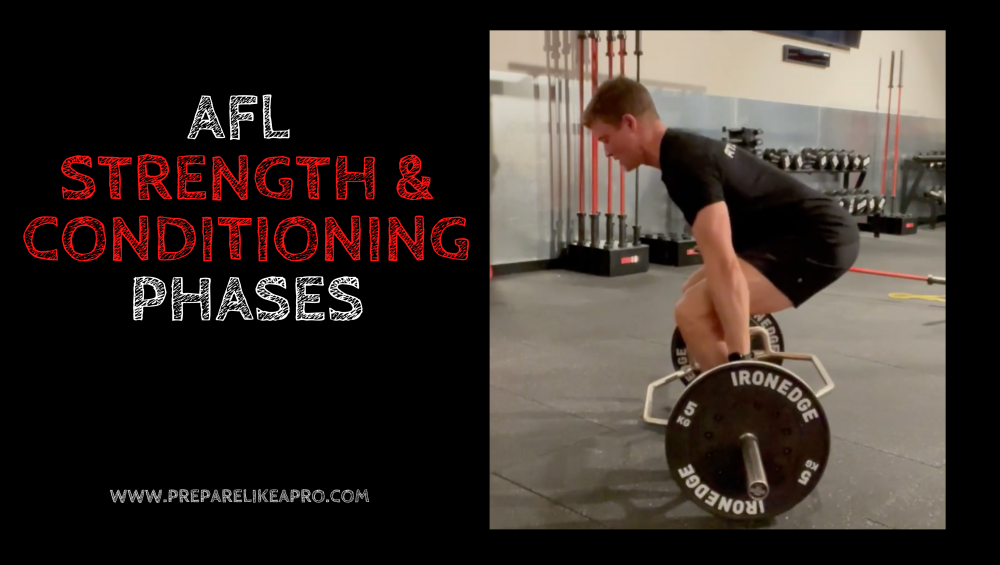 When it comes to football clubs and the health of their players, a comprehensive athletic training program with qualified strength and conditioning coaches is of utmost importance.

Is your team fit enough to outrun the opposition in the final stages of a game?
Can your athletes hold their ground in battles and smash through tackles?
Do other teams comment on how good your team has been in minimising soft-tissue injuries?

AFL strength & conditioning coaches can offer a specific program that can assist athletes in reducing injuries and providing them with a competitive advantage in terms of repeat high-intensity efforts and strength/power.

Strength and conditioning programs are incorporated into the physical development programs of young players to prepare their bodies for competitive football. Below is an example of one of many AFL strength & conditioning programs that are being utilised by the AFL Academy, which clubs may use for their players all through the four phases of the season:

During the offseason and the first half of the pre-season, teams generally implement programs that involve general strength, balance, core strength. Then, as the season draws near, teams incorporate conditioning in their tactical/technical sessions. Finally, with the season in full swing, teams will implement early-week recovery, mid-week main strength, and skills sessions.

These programs are designed for athletes between the ages of 16 and 18. The execution of these programs should preferably be overseen by a strength and conditioning professional. This program’s elements are also applicable to senior football. However, this program is not suitable for players under the age of 16.

What are the Keys to Optimising Performance?

The keys to optimising physical performance are:

Working out at a low intensity will not prepare you for the game and over time will not push the body to react in a way that will result in better performance. It’s important not to overdo it in this regard, as it might lead to injury or mental burnout. Ensure that unloading phases are completed regularly.

This one is simple, really: if you want to play fast, you have to train fast as well. You cannot expect to jog every day and be adept at sprinting during actual matches.

Changing the frequency, pace, and kinds of exercises you do constantly gives your body and mind a steady stimulus to evolve and be engaged in the task.

Consistency in training lessens the chances of your performance going through ups and downs.

The great Martin Luther King advocated, “all men are created equal.” However, the reality of the sports scene is that there are athletes that do next to nothing in training and still mop the field in live games. Meanwhile, there are sportsmen that relentlessly train but still underachieve.

1) Determine what your goals are

First off, are you keen on increasing your game-day performance, or do you merely want to look like a bodybuilder in the mirror, regardless of whether your performance rises? Because the fact of the matter is training methods for football players aren’t interested in how much your appearance improves. Of course, cosmetic gains will occur due to the AFL resistance training program for football, but this is a byproduct rather than a significant goal. So, to put it briefly, bodybuilding-style methods in which you break down the body into different areas on various days and then fatigue the heck out of your triceps or biceps for an entire training session will do absolutely nothing for your capacity to execute athletic feats in football at a high level.

Now I’m not opposed to doing arm training, the focus of mine here is to be clear on what you’re working towards and do everything you can to achieve it.

What exactly do you want to work on with regards to specific movements or abilities? Strength training allows players to improve their physical performance in a variety of ways like:

Let’s be honest: you go to club training multiple times a week during the season and then, play a match during the weekend. This already takes away three days a week where you could concentrate on weight training. Furthermore, going through a conditioning session the day before a game would be foolish because the core objective of your conditioning is to be at your peak during game day. As a result, you’re down to three possible sessions each week. Furthermore, the day after a game is frequently spent recovering whether it is from the game itself, or in some other cases, the night out after the game. So, essentially, throughout the season, you’ll only have two days a week to devote to resistance training, which is a lot if the workouts are executed with intent, and if plenty of pre-season groundwork has been completed.

3) AFL periodisation of your program

This is the “one” aspect wherein most programs fail. In fact, most programs I see footballers following fail to incorporate this due to inadequate exercise selection and subpar implementation of the chosen activities. However, of the few footy strength training programs that do incorporate solid exercises with a high level of utility for football progress, the vast majority of them fail because they haven’t been periodised at all, let alone effectively. I feel for the athletes this is not something they should have to worry about; it’s up to the strength and conditioning coaches to manage this load.

Periodisation is evaluating the entire year ahead of time, then drawing up a strategy ahead of time and having the ability to read the cues and pivot the plan when needed. This does not need to be broken down into the tiniest of details, such as the number of sets and reps. Periodisation is the process of breaking down the year into frames or phases of training and focusing on specific areas, while limiting drop off in others during these periods. This is significant because, in order to maximise the benefits of training, each phase should have a distinct focus.

I learnt this funnel periodisation model during my internship at Hawthorn football club under Andrew Russell. Simply put you do a lot of the basics in isolation at the start of pre-season and as the season approaches the funnel narrows its focus and everything from conditioning, technical and tactical is integrated into football drills to get the most specific transfer and develop match readiness.