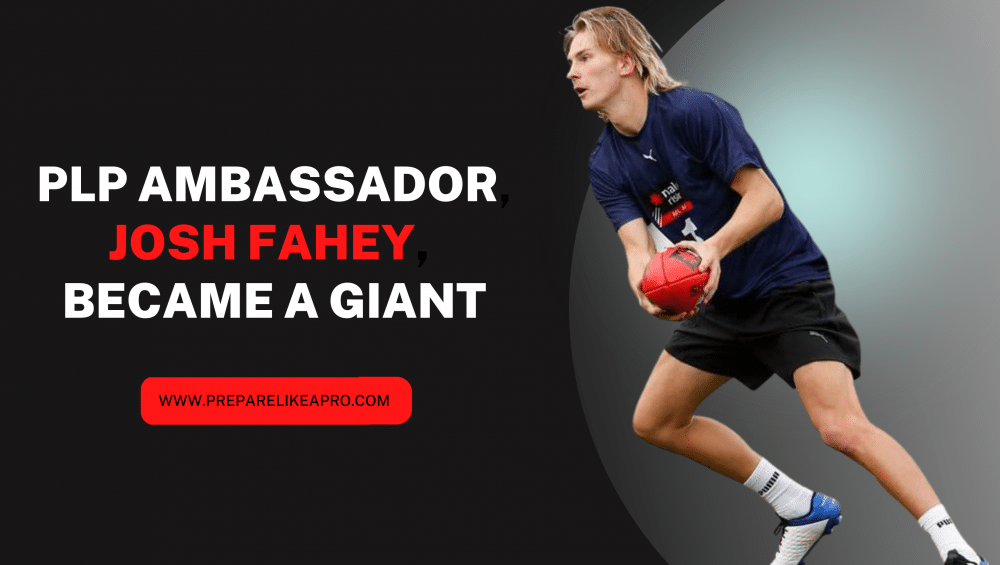 Josh Fahey, a Canberra native, was listed by the GWS Giants in the AFL draft, putting him one step closer to playing in the AFL.

Fahey, a national ambassador for Prepare Like A Pro and a Giants Academy product, was selected with pick 42 after GWS matched a Bulldogs bid.

The 18-year-old is a medium defender/winger with a dazzling left foot who enjoys taking the game on with his mastery of pace and speed. Fahey has been in the Giants’ system since he was a kid, and getting selected up by them is a dream come true for him.  Before the draft, he met with Leon Cameron, who informed him that he was in the club’s plans, and he’s trained with the club in Sydney a few times over the last two years. He “liked every second of it,” as one might expect.

“It seems like home,” Fahey remarked, “and there’s no else I’d rather be than here.”

Fahey, a high talent from outside the AFL heartland, played for the AFL Academy against the Geelong VFL team in April, collecting the MCC President’s medal for best on the ground; played five games for the Giants’ VFL side; and, of course, wore the yellow and black for his Queanbeyan Tigers.  He appreciates everything the Tigers have done to assist him in making the AFL list after coming through the Tigers program.

“They’ve done a lot for me during my career and are probably the main reason I’m where I am now,” Fahey said.

Growing up in Canberra’s rugby league heartland and playing for Queanbeyan, Fahey’s path to the AFL big time was everything but smooth. After his father transferred to the Gold Coast for employment in January of last year, he took a three-month break and played two games for the Suns Academy. After that time, it was unclear if Fahey would still be considered a Giants Academy player for AFL draft purposes when he returned to Canberra.

Before he sealed his credentials with a best-on-ground effort in a losing cause for the AFL Academy against Geelong’s VFL club, league officials signed off on his eligibility.

Fahey is a high-achieving junior who embodies the progress junior football has made in the ten years since the Giants Academy was founded. Despite this, Fahey believes it is still more difficult to break into the AFL from Canberra than it is from the footy-heavy states south of the Barassi-line.

“You don’t get noticed as much,” he stated, “but some people don’t get the same opportunity as others in larger states, so it’s quite humbling to be able to receive this opportunity.”

“There’s a lot of strong talent going through the Academy in Canberra and the Riverina area, so I wouldn’t be surprised if I saw a lot more draftees come out of the area.”

And now that his number has been summoned, the sprightly rebounding defender should expect things to go swiftly.  His goal for pre-season is to put in a good chunk of work in preparation for his AFL debut next season.

“Hopefully next year I have the opportunity,” he said. “It would be fantastic to debut here in front of my local audience and family.”

Check out our Online Training Program