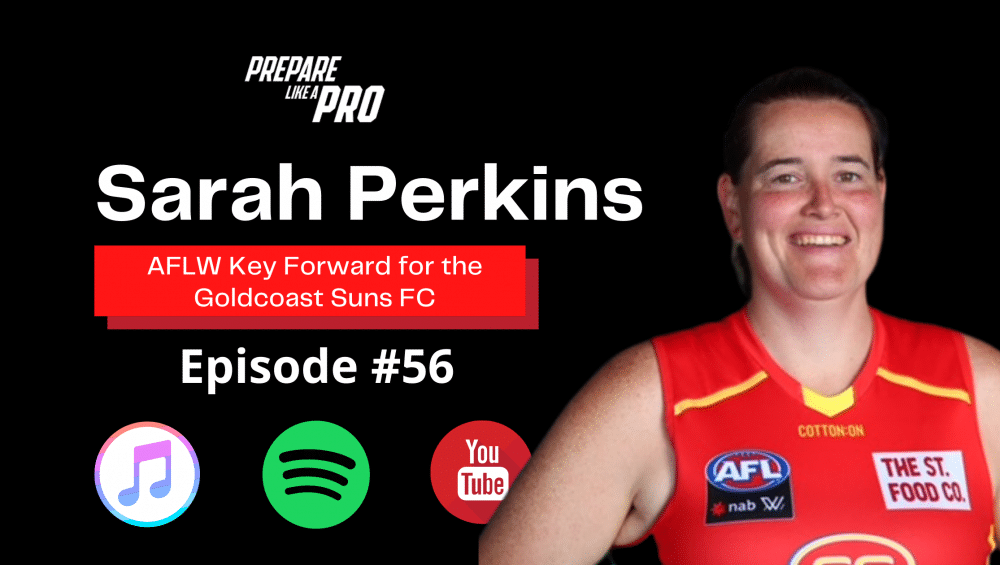 Sarah Perkins signed on to play for the Adelaide Crows as a free agent for the first AFL Women’s (AFLW) season after being passed over by clubs in her home state of Victoria at the first AFLW draft. Perkins, a powerful full-forward with a powerful kick, leaped at the chance to go to Adelaide and made her debut in round one of the 2017 season. She was Adelaide’s top goalkicker in their first premiership season, scoring 11 goals and earning All-Australian honors.

After 17 games with the Crows in 2020, Perkins went to Melbourne and, subsequently, to Gold Coast for the 2021 season.

Perkins was born in Melbourne and grew up playing netball and soccer before switching to Australian rules football. Despite growing up near her brother Simon’s football club, Perkins never considered playing football. Simon and his buddies made Perkins their soccer goalkeeper, according to her mother, Sandy. “They’d constantly piff the ball at her, but she was never terrified. When they’d kick the ball at her, I’d cringe.”

Sandy was cautious when Perkins asked if she could play football when she was 16, despite her bravery and extraordinary abilities. Sandy admits, “I felt a little nauseous inside.” “I was concerned about stuff like heavy knocks and such.” Perkins enlisted club leaders and current AFLW players Meg Hutchins and Lou Wotton to help Sandy cross the finish line. After watching her play, she concluded, “Sarah can look after herself!”

Perkins slipped a disc in her hip when she was 13 and was advised she would never be able to play contact sports again. “It was a bit tough. I gave away soccer and just focused on netball.”

Her soccer coach predicted that she would never make it as a football player, and he was nearly correct. Perkins almost took the path that many young people who find it challenging to balance adult schedules with weekly sporting commitments take, despite a brilliant junior representative career wherein she won three National U18 Championships. Perkins almost gave the game away when she faced a more difficult senior league and lacked confidence in herself.

Even though she was limping through life as a player, the chance to instruct the AFL Victoria’s Youth Girls Academy kept her in the game.

“At the time, I probably wasn’t enjoying my senior football, but I still loved footy. I thought that I had a lot to bring, so I thought if I could go back and help some junior girls to feel welcome, teach them some of my knowledge and pass it on to them. I thought they’d have more of a chance of playing AFL footy than I would, so if I could pass my knowledge on to them and see them do well, that’s what made it important to me.”

In 2014, a new club coach arrived with a Ph.D. in strength and conditioning and strong confidence in Perkins. Perkins placed third in the 2016 VFL goal kicking competition, with 52 goals, behind only AFLW stars Moana Hope and Katie Brennan. A forward-line role in the VFL Team of the Year followed, and Perkins’ drafting appeared to be a foregone conclusion.

Perkins doesn’t like to talk about the period of her life when she wasn’t at her best, but she does admit to not eating well and being miserable. Football helped her get in shape, albeit it wasn’t the only reason. Perkins remarked, “I wasn’t that fit a few years ago, but football gave me the motivation to change my lifestyle and start eating the appropriate food.”

Perkins discovered a newfound desire to be at the peak of her game. The possibility of a national women’s football league provided even more motivation. She got a pedometer and was easily topping 30,000 steps per day while working as a gardener. She was even more encouraged to become a top athlete after being picked to attend the AFL’s first-ever academy program for female footballers. She began training three days a week and was motivated to “improve herself.”

“Being a girl, you work out early on that you can’t play at the top level, so, when I got the chance, I wanted to work really hard to make it happen,” she says.

She lost 30 kilos between the middle of 2015 and the end of 2016. “Ultimately, I was motivated to lose weight because of football…so I guess it saved my life; now I’m more fit, healthy, and happy in my own skin,” she reveals.

Her Disappointment on Draft Day

When the first AFL women’s league was established at the end of 2016, Perkins’ wishes came true. She was eligible for the draft day but was in tears at its end, having been passed over by Victorian clubs due to her apparent lack of size and mobility. Adelaide Coach Rebecca Goddard immediately greeted Perkins and demanded that she be signed before boarding her flight home.

Goddard, who had lost 37 kilograms to become the first female field umpire, recognized a part of herself in Perkins and summoned the young woman to board just as Perkins was boarding the plane to return to Victoria.

Perkins, who had never lived anywhere else, immediately packed her belongings and went from Victoria to South Australia to begin a new life and pursue her football ambition. The Adelaide Crows went on to win the AFL women’s league’s first-ever premiership.

“How I felt when we won the premiership is probably one of the toughest questions I’ll ever be asked because it’s not something you can easily describe. It was the best day of my life,” Perkins says.

So, despite the difficulties, why has Perkins persevered? Simply said, she is a huge fan of the game.