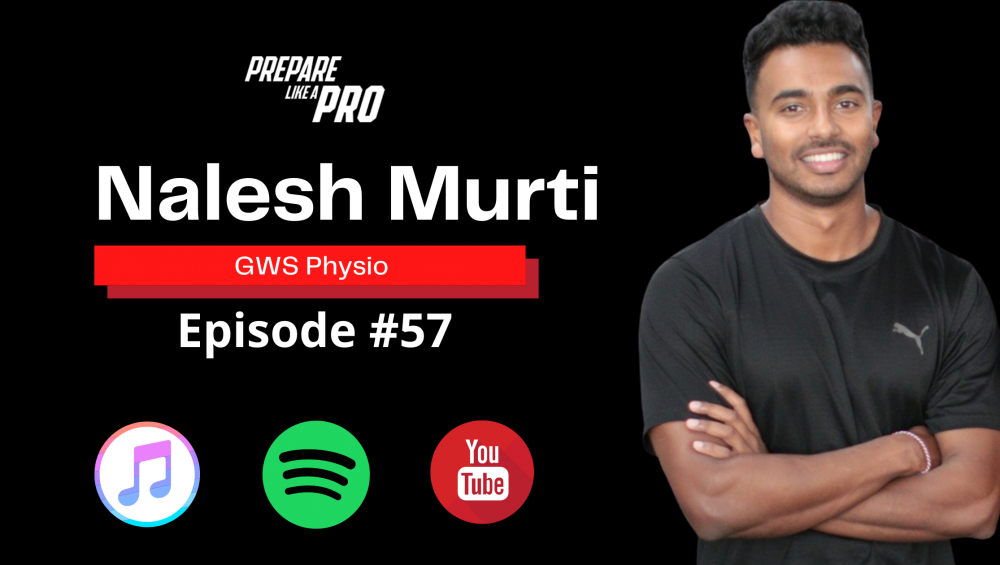 Nalesh Murti is a physiotherapist whose expertise lies in end-stage sports-specific rehabilitation and hip/groin injuries. He’s currently working with the GWS Giants AFL team. Still, his services extend to those of all levels (from weekend warriors to pro athletes). If you’re struggling from an injury or just want someone who can get you back on your feet quickly, Nalesh is your man.

As cliché as it may sound, Nalesh entered into physiotherapy with the sole purpose of being able to help people and make a difference, something he didn’t get when he was a soccer player.

“I feel that’s exactly what I have been able to do over the past nine years. This has been through working in elite sport. Assisting athletes from day one of their injury to helping them perform at their best, week in week out! That’s around 18,240 hours of rehabilitation services of the past nine seasons,” shared Nalesh.

The journey to where Nalesh is now has been far from easy, with the road being littered with potholes and hurdles.

“This journey hasn’t been easy and has had its hurdles just like all my athletes,” said Nalesh. “I myself have suffered a significant injury that set me back for close to 12 months from work, sport, and life. So I get it!”

Perhaps that’s what sets Nalesh apart from the rest of the field, the fact that he knows what athletes go through, especially when they suffer some injury.

“I understand the priorities, what it feels like to be limited by pain, movement, and just not knowing what to do next. I feel this experience definitely gives me the extra touch to relate to all my clients and am able to guide them step by step to successful outcomes with their injuries,” said Nalesh.

Like most physiotherapists, Nalesh got started by playing sports. An injury, though, derailed his career, paving the way for him to make the shift to physiotherapy.

“I think I’ve played the sport, got injured, had good and bad experiences. So from there, obviously, the physio side of things kicked in. You want to still be involved with sport, but then you know it sounds pretty corny, but as a physio or being a physio, I was looking forward to actually helping people. How can I make an impact? It does sound corny and very cliché, but they’re the things that probably got me going.”

“What’s another way to continue being involved in something that I’m passionate in and obviously about sport. So that linked up really well and I think physio kicked in to help people in a career in medicine and with a window to grow. How do I bring that into my workplace and it kind of all felt together so that’s how physio came in the picture,” shared Nalesh.

Nalesh then got involved with the Giants, the Australian Football League’s youngest club, having entered the competition at the beginning of the 2012 season.

“I did my bachelor’s degree, and in the last year, team GWS popped up. I sent an email, and I think out of two hundred and something, I was one of the three that got involved, and it wasn’t much. That’s why I obviously met a couple of other coaches and staff that are still around, and it wasn’t much. You were strapping, taking water out, you’re watching the physios, you’re watching the docks, and for me obviously, that’s better than nothing,” narrated Nalesh.

“From there, I did my honors project, and I can say it now it was a very tactical project, and it wasn’t in terms of anything that I would continue because I found out then the Giants were going to become a team. I approached the Giants with a topic that they would be interested in, and it was how to set myself apart. Because you can easily go to undergrad masters, get all the books and set yourself apart, and to be honest, I’d never do honors again. It was a tough year, learned a lot by myself. It’s a different realm of things in education. I used that to obviously get into the Giants in terms of communicating with them. That went through John Quinn who after a couple of tough conversations, interviews and he kind of said ‘yep no worries let’s do it’ which is really good.”

From there, Nalesh got the necessary hands-on experience with being an end-stage physio.

“I’m doing my honors project there but it gave me the door to go ‘okay cool I can put my foot in the physio end and show my interest and observe and get paid in knowledge and rock up and do hot hours and that’s how it all kicked off.’ Different mentors or figures in my career who kind of pointed me in different directions of observing one thing but getting your hands dirty is another.”

Nalesh did not want to rest on his laurels and proceeded to gain as much experience as possible, even working at several clinics while also working with the Giants.

“I worked at two different clinics and also juggled the Giants and then one of my mentors kind of said ‘hey you can’t be like every other physio because everyone wants to fill the gap to be the rehab physio or still that bridge that gap of end-stage. Why don’t you try to spread your wings a bit and become a great clinical physio?’”

Nalesh’s presence on the Giants has been instrumental in the team’s success. In the Giants’ nine AFL seasons to date, the club has made finals four times, winning a final in each September campaign. The Giants made their first AFL Grand Final in 2019. They produced their first Coleman Medallist in that same season, with Jeremy Cameron kicking 67 goals in the home-and-away season.