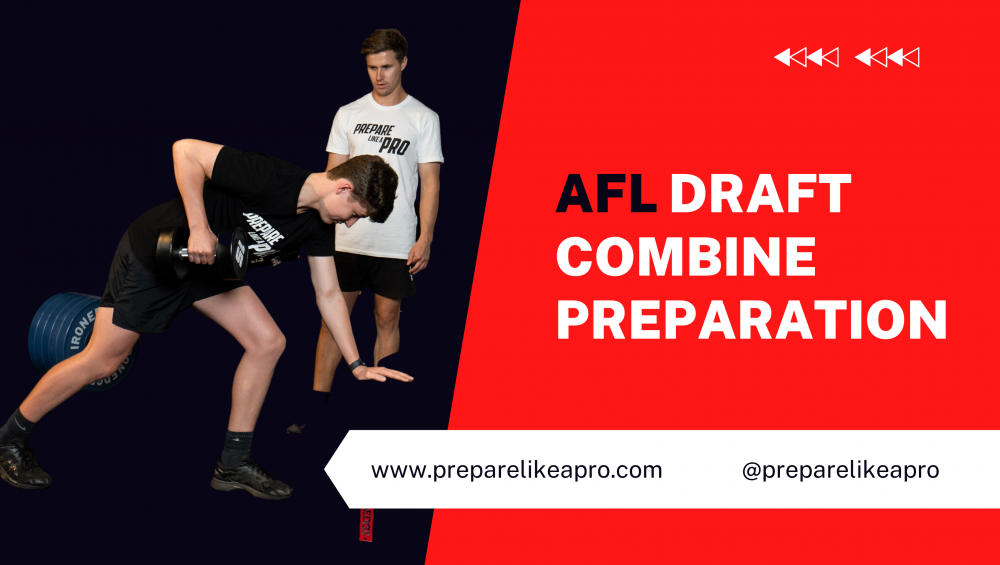 The AFL Draft Combine Preparation is the last hurdle in the AFL Draft process. It tests a player’s athletic ability and mental strength, and flexibility as he adapts to different training drills with varying intensities within a short timeframe. The on-field examination is one aspect of preparation for the event; players must also consider preparing for the psychological rigors of competing against the best players in their age group, both physically and psychologically.

What is the AFL Combine?

In about October each year, the AFL conducts a draft combine. At the Combine, prospective AFL players are put through a battery of fitness, physical and psychomotor tests under the eye of clubs looking for the next champion player. With these tests, their strength training, conditioning training, and athletic training are put to good use as they showcase their skills and athleticism to the different scouts, coaches, and managers.

The AFL Draft Combine has been held at various locations since 1994. The testing was moved from Waverley Park in Sydney, where they started until 1999 when it moved over near Canberra’s Australian Institute of Sport (AIS). In 2011, the Combine was moved to Etihad Stadium in Melbourne.  One thing that changed throughout the staging of the Combine was psychological tests; these weren’t added into things till 1997. Each year the Draft Combine is held in the week following the AFL Grand Final.

Who Runs the AFL Combine?

The fitness testing is overseen by several trainers (physiotherapists, strength and conditioning experts) invited from various sports such as rowing or cycling and Australian rugby representatives to ensure that all bases are covered. The testing is not just the physical side but also mental, with tests involving problem-solving under pressure.

Who are Eligible to Participate in the AFL Draft Combine?

The AFL Draft Combine is open to any draft-eligible player. A player can be invited by one of the eighteen AFL clubs or can nominate themselves. Invites are based on the player’s results in either their state/territory championships or through private testing.

So what does it take to get selected? According to Mark Evans, former AFL Player Manager and current General Manager of the Hawthorn Football Club, “There’s no perfect system, but there are a lot of factors that come into the contract. Proximity to the club might be one factor.”

A player must get at least five nominations from AFL clubs to be considered for the AFL Draft Combine. AFL recruitment managers are slated to give a list of 70 players from the draft pool to be screened at the National Combine before the event.

A total of 100 people are invited to the draft combine. Draft hopefuls who do not obtain sufficient recommendations for the national Combine but earn three or four nominations can attend their state screening. Players who are not selected for the national Combine may be invited to a state-based combine, where they will undergo comparative testing.

How to Prepare for the AFL Combine?

The most prominent hurdle players have to overcome is not only their fitness but also their mental strength. They want to persevere and show just how committed you are during the process. Players must be able to sustain a high level of performance both physically and mentally while adapting quickly to different situations. Players must sprint, run and jump for their clubs in the lead-up to the AFL National Combine.

AFL players must maintain a year-round athletic development calendar, which usually includes AFL strength and conditioning programs at least three times a week. Tight controls need to be placed on diet and sleeping habits. One club is said to have their draftees come in for a lift on Mondays, Wednesdays, and Fridays as well as AFL resistance training while they are playing their football. At the end of the season, players participate in specialized testing at the Australian Institute of Sport (AIS) and, when in AFL periodization, will remain part of an athletic group to ensure that proper fitness levels are maintained during off-season breaks.

Prior to the AFL National Draft Combine, players are required to undergo team interviews, medical examinations, and psychological testing. The club medical assessments include MRIs of the knee, shoulder, and wrist joints and a discussion of any injuries suffered during their playing career.

What Tests are Done in the AFL Draft Combine?

During draft camps and physical testing, sports scientists will run aerobic fitness tests similar to a beep test. Players will need to run 20 meters at a solid speed at a line marked on the ground, with each attempt separated by a recovery period. They will then be asked to run back the distance before returning to the start for another go, continuing until they can no longer keep up with the required pace. This is not simple and is designed to test the athletes fitness.

They will also participate in a variety of agility and sprinting drills, which will test their lower body strength and mobility. Players must show that they are capable of speed bursts when running at top speeds over distances ranging from 30 to 40 meters and ensure they can quickly change direction during the drill. The Combine’s twenty-meter sprint, which is designed to measure acceleration and speed, will test short-term explosive power. This involves running as fast as possible over a distance of 20 meters.

The club’s medical team will also conduct vision tests and psychological testing with various personal interviews during the process. Clubs will usually take into consideration how a player communicates and conducts themselves during these interviews.

Other tests will include a beep test, a 2-kilometer time trial run,  which measures aerobic capacity.

What is particularly challenging this year is the Melbourne based athletes due to Covid restrictions will have to complete the test on their own tracking their efforts via the strava app.

To work with a Prepare Like a Pro coach to help you prepare for a combine test for your draft year fill out the contact page and Jack will get in contact with you soon.